According to a study we recently published in Genetics in Medicine, intragenic copy number variants (CNVs; deletions/duplications) are a substantial proportion of clinically important variants reported in genetic testing across diverse clinical specialties.

CNVs explain a substantial number of molecular diagnoses in hereditary disease
Invitae tested over 1,000 genes across 143,000 patients and found that ~9% of clinically significant variants were CNVs. On a per-person level, CNVs were found in ~2% of all individuals tested and, perhaps more importantly, ~10% of individuals who received a positive report. This novel finding suggests that CNVs are quite prevalent in a clinical population and are a critical piece of genetic testing that should not be ignored. 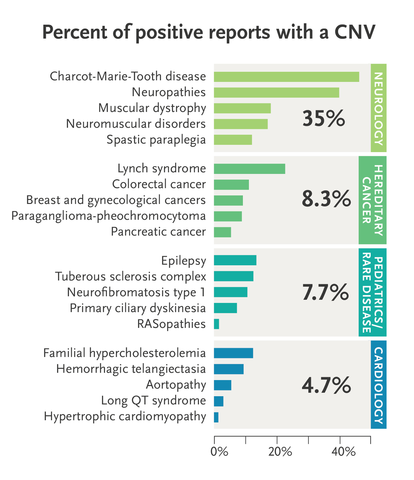 Cost barriers lifted
Broad implementation of CNV analysis in routine clinical genetic testing has been historically limited in part because of the added expense of using separate assays for detection of CNVs and sequence variants. However, Invitae’s platform uses next-generation sequencing (NGS) to simultaneously detect CNVs as well as standard sequence variants on one platform, eliminating the additional costs of running CNV detection and analysis on a separate assay.

This difference in technology has allowed Invitae to keep its testing prices low and defer the savings to the patient, while still maintaining one of the most comprehensive and clinically sensitive platforms in the industry.

Invitae’s findings shed light on the spectrum and prevalence of CNVs in a large, diverse patient population. The results of this study demonstrate that universal CNV analysis is no longer an optional, cost-prohibitive part of genetic testing, but an essential and clinically significant one.

For more information, read the full study, listen to Genetics in Medicine’s  7-minute podcast, or watch the recording of a webinar with Swaroop Aradhya, Ph.D., FACMG, discussing this study in further detail.